Eddie Cochran once said "there ain't no cure for the summertime blues" but at TKO Records we did our best to have good time this summer. In July we were honored to have musician/producer/writer Chris D. of Flesh Eaters/Slash Records fame. 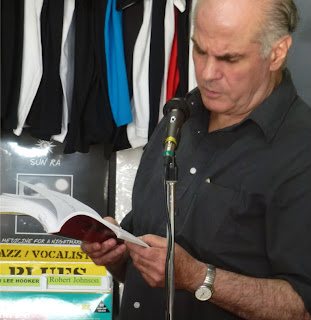 Donna Lethal, an up and coming author started the night off with a reading from her memoir Milk Of Amnesia; a humorous retelling of a young girl's trials and tribulations. Like Chris, Donna's work is published by New Texture, an independent publisher in Los Angeles. Chris read excerpts from his book A Minute To Pray, A Second to Die; a collection of lyrics, short fiction, and poetry. He talked about everything from his involvement with Slash magazine to writing and directing his own film I Pass For Human, a tale of a woman self-medicating with hard drugs which forces her to see the ghosts of dead addicts.

What was most interesting about Chris D.'s visit was all the things he discussed that showed just how important he was to the vitality of the early Los Angeles punk scene. Chris produced records for bands like The Gun Club, released seminal records such as the Tooth and Nail compilation, and was in talks with Black Flag (known at that time as Panic) to release their debut LP which would later become Keith Morris's portion of the Everything Went Black compilation. 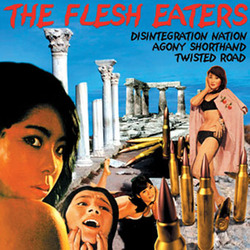 To coincide with the occasion TKO released a Flesh Eaters 7" that brought the original Flesh Eaters demo into the vinyl community for the first time. The 1978 Flesh Eaters lineup (with Tito Larriva of The Plugz) bang out three Flesh Eaters classics; "Disintegration Nation", "Agony Shorthand", and "Twisted Road".  These songs really set the pace for the emerging punk bands of the late 70s/early 80s. The cover art was designed by Chris D. and is limited to 500 copies.

As we look back at history and recognize those talents and creative minds that fueled artistic and cultural movements, it's always great to learn the facts that are sometimes overlooked. This Summer evening at TKO was one of those moments when history was once again rewritten and those underground forces were fully unearthed, courtesy of Chris D.

To check out Chris or Donna's book visit: http://newtextureblog.blogspot.com/
at 6:01 PM

Check out our posts!